20 Oct Are spots and acne the same thing?

Posted at 07:48h in Skincare by Charlotte Gallagher

The terms ‘spots’ and ‘acne’ are often used interchangeably, but in fact, they’re not the same thing at all. Here we explain what they are and how spots and acne are different.

Spots are swollen, red lesions filled with pus, a liquid made up of white blood cells and bacteria. Often called pimples or stress spots, they are the body’s way of healing itself. They develop when the skin’s pores become clogged and inflamed.

In response to bacteria clogging the pores, the body sends extra blood and chemicals to the area to fight the infection which explains the redness.

There are actually six different kinds of spots:

Acne is a long-term skin condition. It affects the skin’s pores or hair follicles and is essentially caused by excess oil production which can cause pores to become blocked and infected. Unlike an outbreak of spots, acne is not caused simply by bacteria.

The symptoms of Acne are most commonly raised red spots or lesions on your face, but according to the NHS, half of all acne sufferers will have spots or cysts on their backs and 15% show symptoms on their chest.

Almost everyone is affected by acne to some degree at some point in their life. It’s known to run in families so if your parents had acne, it’s likely to affect you too.

Acne is most common in teenagers but can occur at any age. In fact, one study found around 54% of women and 40% of men over the age of 25 suffer from acne to some degree.

Many women may find that breakouts caused by acne can be more of a problem during their period. This is because hormone levels fluctuate during menstruation and impact the skin’s production of oil.

Why is acne more common in teens?

During puberty, the sebaceous glands enlarge and levels of hormones that increase the production of oil are high. This is why teens are more prone to acne.

What are the other symptoms of acne?

Alongside spots, those with acne will usually find they have oily skin. Plus, another common symptom is skin that is hot to the touch – a telltale sign of infection.

How to treat spots and acne

While acne can’t be cured and spots can’t be avoided altogether, there are many treatments that can control breakouts, but finding one that works for you usually involves trial and error.

If you’re struggling with either spots or acne, here are a few acne remedies to try:

If you’re really struggling with spots or acne, why not try one of our two proven natural breakout remedies?

Here’s what one customer who bought HRI Clear Complexion from Holland & Barrett said:

Developed especially for teenagers, HRI Teen Skin is a vegan multivitamin and specialised skin formula which contains a unique formula of 26 nourishing nutrients and live cultures. Packed with B vitamins to regulate hormones, two tablets every morning can help keep teen skin blemish-free.

Here’s what just one happy customer said on Amazon:

“Working well so far, I bought for my teenage son to help with skin issues & vitamins he misses out on. The tablets have all the vitamins I was looking for without being processed or overloaded to cause any adverse side effects. Improvement seen after 1 month will update after 3 months continuous use.”

Whether you suffer from acne or just the occasional breakout of spots, it doesn’t change who you are. But if you feel that you’re becoming feel anxious or depressed due to your acne, Acne Support offers some useful resources that could be helpful.

If you are interested in finding out news and information about a natural approach to supporting your health, beauty and wellbeing, why not follow HRI Herbal on Facebook @HRIHerbal. 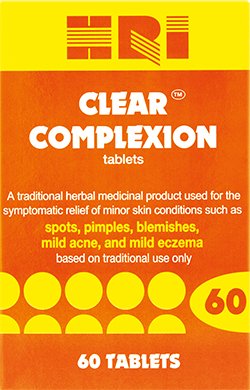 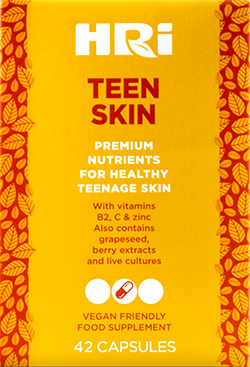